The History of the Vacuum Cleaner 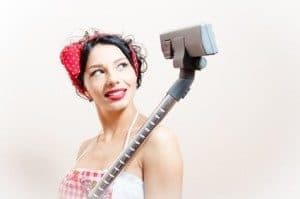 A clean floor has been an important need for homes and businesses for centuries. Sometimes called a sweeper or a hoover (not to be confused with the actual Hoover brand name), attempts to create a modern vacuum cleaner date back to the 16th century.

Were there extensive carpets in homes back then? No – but there were massive rugs that needed to be cleaned. Can you imagine taking out a 20 foot by 20 foot tapestry outside to beat the dirt out of it?

It’s no wonder why many homes took their rugs outside and beat them clean only once or twice per year.

Despite efforts at creating an early vacuum cleaner, it wasn’t until 1869 when a patent was finally issued in the United States for one. It wasn’t 100% mechanical in nature, but Ives McGaffey did create a vacuum that was powered through hand-pumping that could effectively clean a rug. McGaffey called his contraption the “Whirlwind” and it would be the gold standard of vacuuming for the next 30 years.

Melville Bissell, who started the vacuum company of the same name, had a terrible time with allergies and asthma. The McGaffey carpet sweeper just didn’t pull the allergens out of a rug like he needed, so Bissell worked on his own model. By 1876, he’d invented a mechanical carpet sweeper that found a niche market, but the initial models weren’t highly successful.

It would be a man named John Thurman who would turn the industry upside down. Thurman represented the epitome of the late 19th century entrepreneur in the United States. He saw that there was a need for a home to have clean rugs and that a lot of money could be made if a machine could be invented that would allow him to service several homes per day. Taking inspiration from the gasoline powered automobile engines that were being developed in the 1890s, Thurman invented a vacuum that also ran on gasoline in that was granted a patent in 1899.

For the next 4 years, Thurman began building up a business in his hometown of St. Louis. In many ways, Thurman started the first professional carpet cleaning service as well. He didn’t have a van or truck with a powered vacuuming system inside, but he did have a horse-drawn carriage and a gasoline powered vacuum cleaner that could clean rugs fast. By 1903, he was charging $4 per home. That’s the equivalent of about $110 today.

Several Variations of Thurman’s Vacuum Would Be Invented

The general public was fascinated with the idea of a personal vacuum cleaner at the turn of the 20th century and this caused a number of inventors to create their own version.

It was a chronic cough, however, that would change the vacuuming world for good. A man named James Spangler worked as a janitor in an Ohio department store. Part of his job was to use a carpet sweeper daily and after some time of coughing, Spangler determined that the source of his cough was the sweeper. To solve this problem, he created a portable device from a soap box and an old fan motor with a pillow case so he could clean his rugs. By 1908, he’d received a patent for the world’s first portable vacuum cleaner.

James Spangler wanted to create sales for his portable vacuum cleaner right away and looked for investors that could help to get him off the ground. One of the first buyers that came his way was his cousin, who happened to be married to a man named William Hoover. Spangler sold his patents to Hoover and would continue working for the organization as an inventor and designer. In return, Hoover financed the improvements to the machine.

This eventually led to the first vacuum on a stick design that is so common today. Like many innovations, however, these first “modern” vacuum cleaners didn’t sell very well. To counter the hesitation, Hoover created a 10 day free home trial of their equipment. It wouldn’t be long before there was a Hoover vacuum in almost every American home. By 1919, the beater bar was added to the vacuum.

Modern Vacuum Inventions Have Been Few and Far Between

Outside of the filter bags that were introduced in 1920 by the Airway Sanitizer Company, the only real improvements to the vacuum cleaner design in the last 100 years has been the bagless canister. Dyson pioneered the dual cyclone bagless machine and others have followed suit with similar designed over the years and that has been the extent of the innovation.

There are small and large vacuum cleaners. There are vacuums that have poles which extend to reach far places. Some vacuums have dozens of attachments. Despite all of this, the initial work of the inventing pioneers of the vacuuming industry can still be seen today in the vacuum cleaners that are available for sale today.

It beats as it sweeps as it cleans. If you’re using any upright vacuum today, there is a good chance it has a beater bar that sweeps the carpet. That technology will celebrate 100 years of use in 2019. The history of the vacuum cleaner might date back to the Middle Ages, but the entire industry today is based on about 30 years of innovation around the turn of the 20th century.

This is just proof that one good idea really can last a long, long time.

Why Even Vacuum At All?